Dave Smith is married to Sue and they have two sons and two grandsons.
He graduated in Statistics from University College London in 1964 and worked in Operational Analysis in various Government Departments before he took early retirement in 1995. Since that time he has done numerous courses on various aspects of Ancient Egypt at the local centre of the University of Kent at Tonbridge. Although he did not want to bother getting all these courses accredited towards a degree he chose this line of research as a more interesting alternative to those suggested and has pursued the research privately ever since. He has been to Egypt five times but has many other interests as well. You can find out more about some of these and also his earlier efforts to raise money for charity through the salvage of data from AMSTRAD floppy disks by visiting http://www.diskdoctor.co.uk/dave.html

The sun played a central role in the religion and culture of Ancient Egypt. It is therefore surprising that there seems to be no unambiguous mention of solar eclipses in Ancient Egyptian texts. Eclipses would certainly have been experienced by the Ancient Egyptians and records of them would be expected to occur in the religious corpus. END_OF_DOCUMENT_TOKEN_TO_BE_REPLACED

Part 1 of this paper looked at the source texts and reliefs. Part 2 now sets out the astronomical background and predicts the solar eclipse events that would have occurred during the New Kingdom. These are then correlated with the New Kingdom texts and funerary material to test the hypothesis that these might record actual eclipse events. END_OF_DOCUMENT_TOKEN_TO_BE_REPLACED 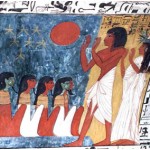 This paper discusses a class of inscriptions appearing on eleven artefacts together with text and vignettes from five tombs and funerary material from Deir el-Medina, which may contain expressions made in response to eclipses. It is proposed that: END_OF_DOCUMENT_TOKEN_TO_BE_REPLACED

a) these artefacts record the witnessing of a deep solar eclipse; and END_OF_DOCUMENT_TOKEN_TO_BE_REPLACED

b) ill understood at the time, the eclipse was interpreted by witnesses as a form of punishment or omen and was consequently expressed in religious terms on stelae; protection against recurrences of the event was also included in tombs and on funerary furniture. END_OF_DOCUMENT_TOKEN_TO_BE_REPLACED