By Gwyn Ashworth-Pratt. Published in In Brief, Egyptological.  16th June 2014 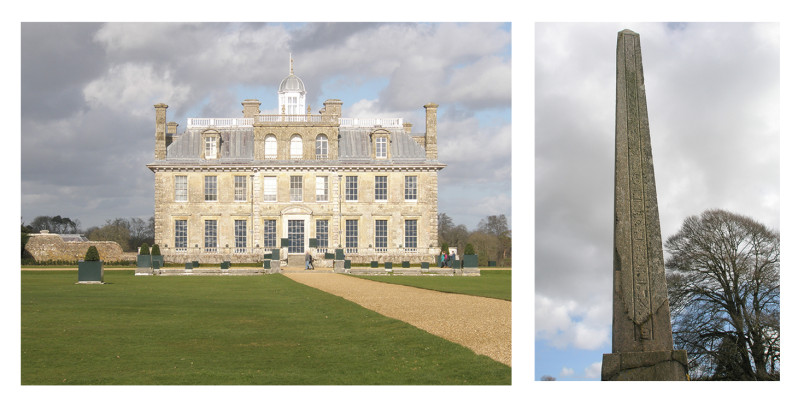 William John Bankes was a gentleman traveller (1786 – 1855).   When his father died unexpectedly, William became the heir of his father, Henry Bankes MP, eventually inheriting his house and fortune.  He liked adventure, and Egyptology and Nubiology are richer for it.  Intelligent and well-educated, he mixed with the upper echelons of society including the poet Lord Byron, who became a lifelong friend.  Bankes visited several different countries, finally seeing out his last years in Venice.  He was a dedicated collector of antiquities, many of which are now kept at his family home, Kingston Lacy in Dorset, and he was a contributor to Thomas Young’s attempts to translate hieroglyphs.

Over one weekend in February 2014 the Egyptian Exploration Society  and ASTENE (The Association for the Study of Travel in Egypt and the Near East) combined forces to provide a two days of amazing insights into this man’s life.  Three of us, all members of the Sussex Egyptology Society made a mini holiday of this opportunity, staying in Poole. Transport to the various sites including Windborne Minster, Dorchester and Bournemouth was provided for all including the lecturers.  The main speakers were Dr Patricia Usick, Dr Aidan Dodson, Dr Daniele Salvoldi and Dr Robert Morkot who all stayed with the group, and it was a good opportunity to meet up with old acquaintances.  Even the weather stayed virtually dry for us but it was interesting to see that Kingston Lacy’s picnic tables were now in the middle of “lakes” with the swans swimming around! 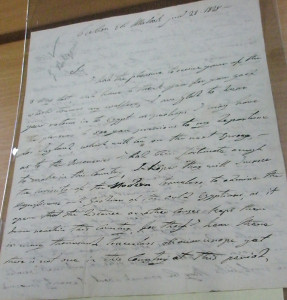 Correspondence between Bankes and Young

Following a chance encounter with adventurer Johann Ludwig Burckhardt, Bankes was inspired with a desire for serious archaeological research, which took him far beyond the more leisurely pursuits of the average gentleman traveller.  He also became very interested in the translation of hieroglyphs but instead of setting out to become a philologist, probably due to the amount of dedicated study this involved, Bankes supported Thomas Young in his research.  Handwritten correspondence between the two is now held in the Kingston Lacy archives.  The Rosetta Stone and Champollion were important in the decipherment of hieroglyphs but that story has overshadowed previous work.  Although it is now Jean-François Champollion who is famous for the decipherment of hieroglyphs with the assistance of the Rosetta Stone, other work preceded his, and Young was one of the leading scholars in this field. Young sent him a list of known translated hieroglyphs and cartouches and requested samples of more cartouches and especially any texts that contained dual (or more) languages.  One of the items acquired by Bankes was the Philae Obelisk, now in the gardens at Kingston Lacy.  This contained both hieroglyphic and Greek script and contained the names of Ptolemy VIII, his wife Cleopatra II and their daughter Cleopatra III.  It was Bankes who pointed out the names when sending copies of the texts to Young.  We were privileged to see some of their original correspondence. 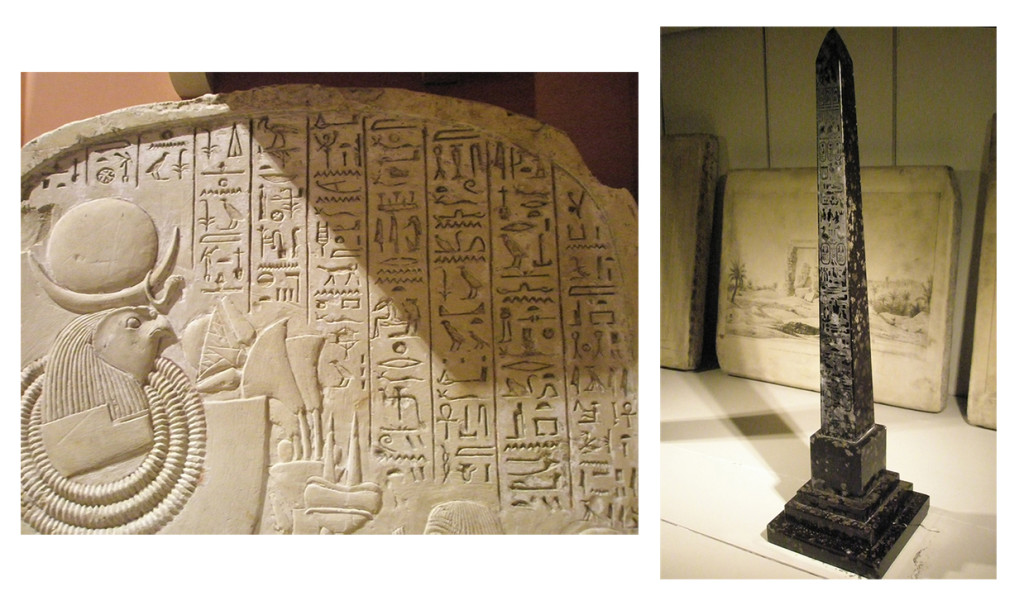 On the left is a stela from the workmen’s village at Deir el Medina depicting two chisel-bearers making an offering to the gold Kohns-Neferhotep, and to Thoth. The obelisk and other large items are on open display.

Bankes collected artefacts from many countries, and Kingston Lacy houses Bankes’s Egyptian room, now the property, along with the House, of the National Trust.  The room is small when compared with a museum gallery but every exhibit is stunning.  Shabtis, amulets, stelae, models and more mingle with paintings and drawings from his associates, some being technical and more.   Sadly, not every item is provenanced.  The billiard table makes a very useful display table!  Over the whole trip we saw some of Bankes’s portfolios of 1,700 archived drawings and paintings by Bankes himself, Giovanni Belzoni, Alessandro Ricci, Louis Linant de Bellefonds, William Henry Beechey and other colleagues.  Bankes himself, not being one to keep a record of his trips, relied strongly on his dragoman Giovanni Finati’s diary.  Finati was fairly meticulous at keeping the trips documented and eventually Bankes translated these diaries.  Ricci, a brilliant artist was trained as a draughtsman and was also a doctor and acted as the personal physician to Henry Salt, the British Consul-General in Luxor.   There is a tremendous amount of material in these archives, especially of Nubia, as Bankes made 3 extensive trips there and excavated many sites.

The next day, Sunday, we all met up again and were coached to Dorchester to visit the Dorset History Centre.  Not only is the huge collection of great interest to scholars specialising in the history of Egyptology, it contains records of monuments which have subsequently been lost.  Again the display of artistic representations was massive and this was only a small sample!  This unimposing building held a goldmine of history pertaining to Bankes and his team.

Lunch was followed by a journey to Bournemouth and the Bournemouth Natural Science Society.  This was the rabbit pulled out of the hat.  What we saw there was so totally unexpected.  Starting as a Natural History Society or Museum, as time went on they were bequeathed Egyptian collections and fortunately for all of us, they expanded, and moved into this building, which they continue to occupy today.
One of the museum’s occupants is the mummy Tahemaa.  Tahemaa has been in the news, undergoing a CT scan and she was found to be a 25/26th Dynasty lady enclosed in a c. 22nd Dynasty wooden anthropoid coffin, which was plastered and highly decorated. A facial reconstruction has been made. 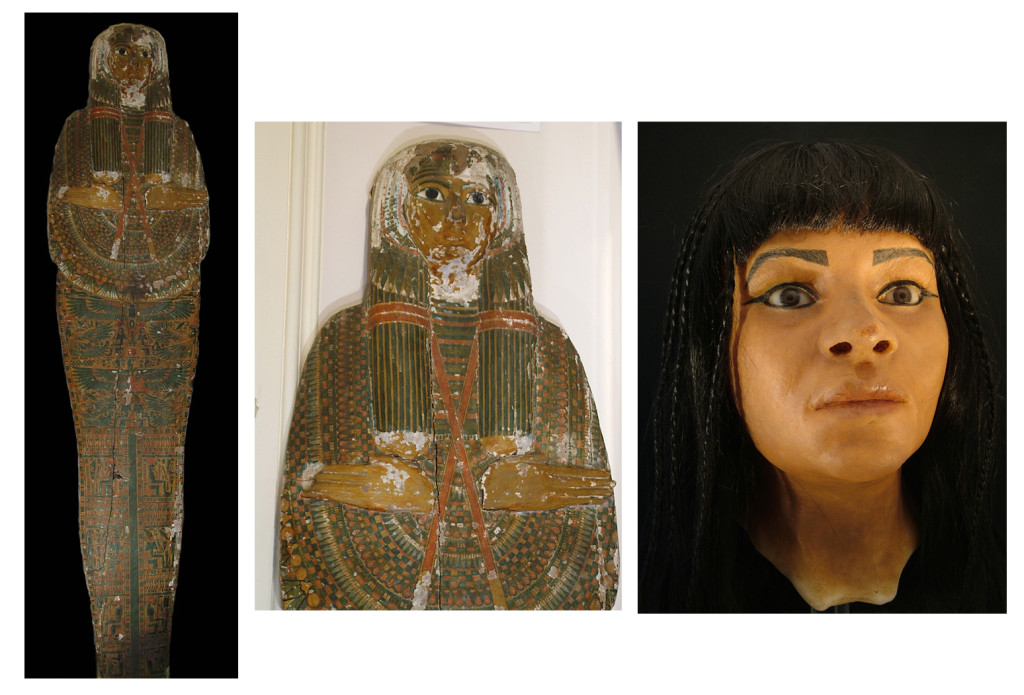 Tahemaa, with thanks to Stephanie Roberts

The piece de resistance though, was stunning.  In amongst all the wonderful artefacts (again, some are shown earlier in this piece) I caught sight of a limestone relief.  I was in something of a trance as an article by curator Stephanie Roberts in Ancient Egypt Magazine clawed it’s way back into my memory.  The quality of the limestone is the finest anywhere as is the delicate carving in raised relief.  Research has proved that although found at Hatshepsut’s Temple, it did not come from there – the supposition is now that it has in fact come from the Thutmose Temple and was washed downhill when part of the mountain collapsed or that it was even moved by a torrential, rare, rainfall.  It can be seen that the two actually have their arms entwined, so, where does that put the argument of Thutmose III hating his step-mother?

So there you have it – a magic weekend in the soggy climes of Dorset, thanks to the Egypt Exploration Society and ASTENE plus the speakers, curators, and of course the delegates and William Bankes himself.  I will leave the last word with Patrica Usick and her book Adventures in Egypt and Nubia.  To quote from the sleeve notes “During the years 1815 – 19 Bankes criss-crossed Egypt and the Near East amassing a vast portfolio of notes and manuscripts, as well as drawings by his own hand and the artists who accompanied him on his travels.  The accuracy and detail of Bankes collection makes an invaluable record of ancient monuments now lost or damaged.  His extraordinary discoveries were a revelation to contemporary scholars and proved instrumental in the race to decipher Egyptian Hieroglyphs.” 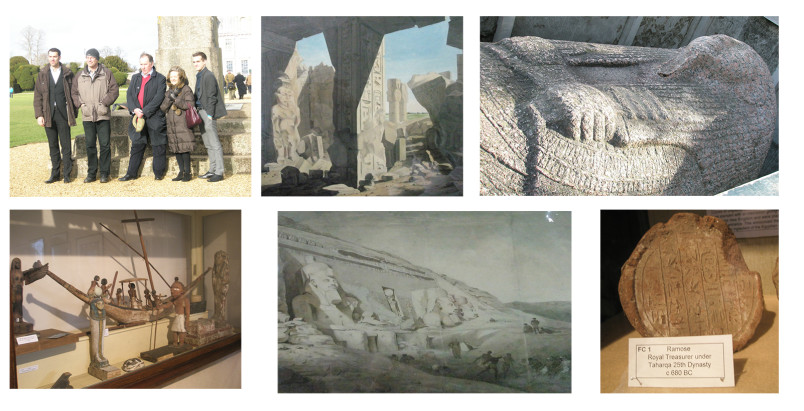 All photographs by Gwyn Ashworth-Pratt except the photos of Tahemaa and her reconstruction, courtesy of Stephanie Roberts, Curator of the Bournemouth Natural Science Society, with sincere thanks.

Adventures in Egypt and Nubia

Bierbrierm M.L. (ed.) 2012. Who Was Who in Egyptology, 4th Edition. The Egypt Exploration Society.