The Origin and Early Development of the Smiting Scene 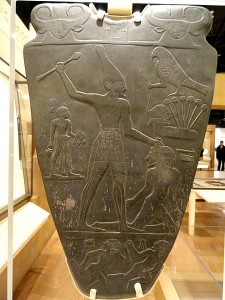 Figure 1. The Brandishing scene shown on a copy of the Narmer Palette at the Ontario Museum. Photograph by Daderot.

The depiction of the king with mace raised above a helpless prisoner is one of the most prominent and enduring images of ancient Egypt. Although it has often been claimed that the origin for this iconic image lies in the Predynastic Era, this is unlikely. Not until the Narmer Palette do we see a possible model for dynastic developments of the image. These developments are traced here within the Early Dynastic Period.

The depiction of the king with mace raised above a helpless prisoner is one of the most prominent and enduring images of ancient Egypt (Figure 1). Indeed, it has been described as ‘the icon of majesty’ (Kemp, 1989: 45) and traced from an origin in Naqada I running through to the Roman era. Until the widespread use of iron the pear-shaped stone mace was a powerful weapon, especially with the mass of ordinary infantrymen being protected at best with a wooden shield. A number of authors have proposed an origin as early as Naqada I for the smiting scene (Wilkinson, 1999; Andelkovic  2011;  Hendrickx, 2011;  Hendrickx & Eyckerman  2012), or for an elite figure with a mace being an indication of subjugation (Köhler, 2002). An alternative of the Hierakonpolis Tomb 100 figure with weapon raised above three prisoners being the progenitor has also been suggested (Logan, 1999). These images are seen as examples of an unbroken tradition which informed the famous pose of the king on the Narmer Palette and related images throughout the pharaonic period. How can we trace the origin and development of this iconic image?

Table 1, Dates of the Naqada culture period (after Hendrickx, 1996)

A depiction of a proposed victory scene with prisoners on C-Ware from Tomb U-239 at Abydos (Dreyer et al 1998) (Figure 1) is proposed as the original smiting scene (Wilkinson, 1999; Andelkovic  2011; Hendrickx, 2011; Hendrickx & Eyckerman, 2012). Thus, the repeated feathered figure holding an object taken to be a mace is described as controlling bound prisoners, and a similar depiction of elite figure with bound prisoners is assumed for a C-Ware pot from U-145. However, this interpretation is not convincing. In a scene on a C-Ware pot from Abydos Tomb  U-239, far from having their arms tied behind their backs, the smaller figures in the top row appear to be holding hands with the larger mace-bearing figure (Graff, 2009: 245). The maces, if that is indeed what they are, are held before the figures in a non-threatening manner, and a woman carries a child in the bottom row. An elite family seems to be shown here. That these are crude depictions of limbs and not ropes is supported by the example of a pot from Abydos Tomb U-145 (Graff, 2009: 247). The two right-hand figures are armless but stand close together, while the feathered central figure is connected to the immediate figure to his left by a crude limb, but again the figure on the far left is armless. The central figure is not ‘bound’ or indeed in any way connected to the figures on the right of the scene. The crudity of this depiction, mirrored on the U-239 pot, can be seen in the legs being shown as a wedge rather than as separate limbs. Even the figures harpooning and lassoing hippopotamus and bovid are crudely depicted. This is also evident from a similar example of C-Ware now in Brussels (Figure 2). There is no evidence for bound prisoners and these are not victory celebration scenes.

The creators of the images on the C-Ware appear not to have been interested in an accurate depiction of the human form. The correct anatomical outline, especially of limbs in figures standing in a row rather than engaging in an action of significance, simply did not concern them. They concentrated on the features which were of importance. Where people are depicted on C-Ware, the focus is on the C-Ware the focus is on the raising of both arms, surrounded by supporting people on the limited number of vessels displaying this image (figure 1). Other important and more widely repeated items are hunting, often showing dogs alone, hippopotamus and crocodile harpooning and the capture of animals such as antelope. Military themes are entirely lacking and the rare depiction of weapons is always directed against animals (Graff, 2009). There are no military scenes on the D-Ware from the succeeding Naqada II c/d period. Nor do scenes of conflict, and especially the presence of prisoners, exist in the early Naqada II Eastern Desert rock-art (Lankester, 2013). Even the single example of a prisoner scene west of Thebes at Gebel Tjauti has been dated to Naqada IIIa, or perhaps IId (Darnell, 2002, Hartung, 2007). Thus, there is no reason to potentially see depictions of prisoners and celebration of victory on C-Ware, or indeed in any media, until the single example from Tomb 100 in Naqada IIc. 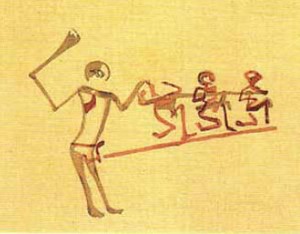 Is the well-known depiction of a figure with three ‘prisoners’ from Tomb 100 the progenitor of the smiting scene? (Figure 3). It is invariably assumed that the three kneeling figures are bound. However, the one nearest the ‘smiter’ clearly has his arms free, and the other two do not have their arms pinioned straight down behind their backs but appear to be at rest. The ‘smiter’ holds an object which looks more like a club than a pear-shaped mace. Moreover, he is holding it at the base of the handle where he would have leverage only to wave the object rather than to hit anyone with it. Nor is he standing on the same level as the three kneeling figures. The hitherto evident smiter could therefore be in command of the kneeling men. What is assumed to be a rope does not connect the kneeling figures at the neck and there is a line connecting it the knee of the middle figure, while there is a gap (marked by a deeper brown hue) once it reaches the figure nearest to the ‘smiter’ (Hendrickx, 2011: 76). Black and white line drawings conceal this. Indeed, the line on which the figures kneel is sometimes omitted, accentuating this effect (for example: Andelkovic, 2011: 27). The group of figures is not in a prominent position in the T100 tableau but in the extreme left-hand corner. Moreover, there are two figures the same size as the ‘smiter’ carrying crooked sticks nearby (and another elsewhere) which may indicate that they are authority figures (Quibell & Green, 1902). Therefore, the primacy of the figure often proposed to be a ruler is not convincing.

Even if the scene from Tomb 100 does represent smiting, there is a period of more than 400 years from this image to the Narmer Palette where there are no comparable scenes. During Naqada IId there are images of kneeling prisoners with their arms tied behind their backs from Tomb U-127 at Abydos (Hartung, 2011).  However, there are no mace-bearing figures. One warrior with a mace leads a prisoner away on the Gebel el Araq knife handle (Louvre Museum, E11517) rather than attempting to strike a supine figure. There are mace-carrying figures on the Naqada IIIa Hunters Palette, but they participate in a hunting scene and there are no human prisoners. Knife handle E4975 (Ashmolean Museum) shows bound kneeling prisoners but no captor with a mace.

Smiting on the Narmer Palette?

If we accept that the T100 image does represent a smiting scene, despite the above objections, and the lack of such a scene from Naqada IIc to the beginning of the First Dynasty, does the Narmer Palette present a smiting scene in the same vein? Although it is universally assumed to be so, three features stand out which suggest that this is actually not the case. Firstly, the king grasps the mace handle more than half-way up towards the head (Figure 1). Thus, Narmer brandishes the mace above his head. Secondly, he is engaged in a static pose rather than in the attitude of being prepared to strike a blow at the prone enemy beneath him. rather than grasping the supine figure by the hair Narmer either lays his clenched hand on the Asiatic’s head or the hand actually may be positioned in front of the head. The actual position of the king’s hand is difficult to determine, but on the back of it is is a large seal. From Hierakonpolis there are ivory cylinders and a small macehead with a number of prisoners, each one with the arms tied behind their backs, with mace-wielding larger figures standing behind them (Figure 4). It may appear that the larger figure grasps the hair of the smaller figure. However, the latter’s hair is swept back and down. What appears to be the hair grasped in the hand of the mace-wielding figure may be a seal. The large size of some of these ‘seals’ may be due to the inability of the carver to make them small enough rather than them representing hair. 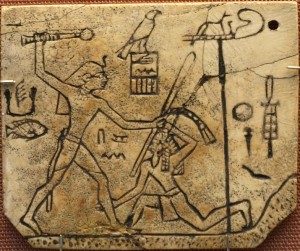 There is no other example of the king holding a mace until the reign of Den in the second half of the First Dynasty from which we have a detailed label (Figure 5) and inscriptions in Sinai (Tallet, 2010). The picture of the king holding a mace on the label portrays several differences from Narmer. The stance of Den, leaning forward rather than upright and static, is active and he holds the mace far enough down the handle in order to get a good grip to strike. Therefore, this is indeed a smiting scene, although whether the grovelling Asiatic was executed is questionable. He grasps the king’s leg in a gesture of submission and appears to hold Den’s other hand which rests on the Asiatic’s head. In place of the seal on the back of the king’s hand, which we never see after Narmer, Den holds a shaped staff to which a tassel is attached. Since the Asiatic is wearing a headdress, the king cannot be grasping prisoner’s hair but again rests his hand on the supine figure’s head. The example of the Asiatic grasping the king’s leg is unique as other examples from Den’s reign show a cowering figure (Sinai: Tallet, 2010). By the Third Dynasty the stance of the king is even more active as shown in the inscription of Sekhemkhet in Wadi Maghara in Sinai (Figure 6, left). It is notable that here, too, the king does not grasp the Asiatic by the hair but the presence of the staff and ruler’s hand is sufficient to control the prisoner. Although we are accustomed to the New Kingdom scenes where the king grasps the foe or foes by their hair (Figure 6, right), this is not the image we see for a considerable period of ancient Egyptian history. 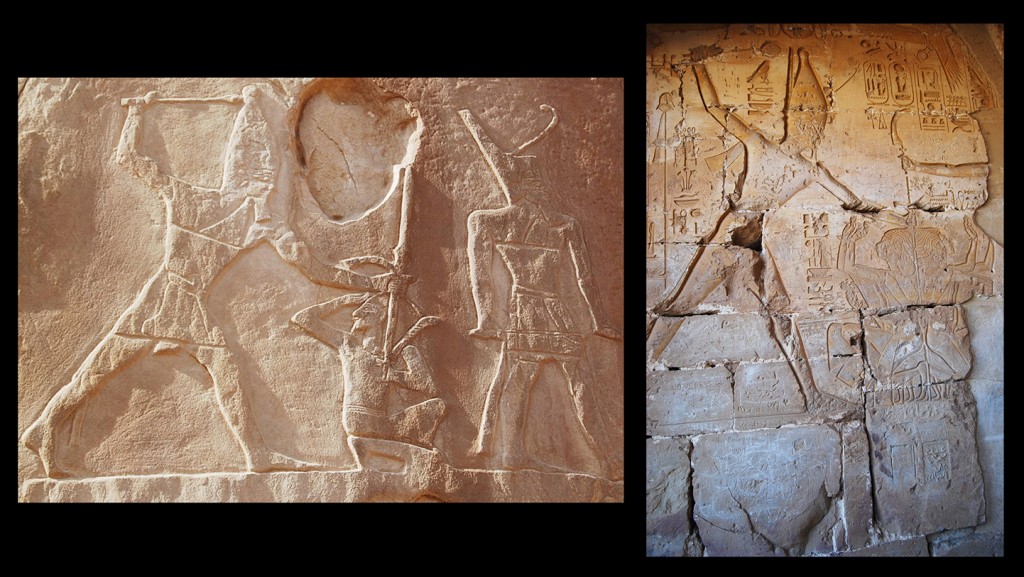 We can rule out the origin of the iconic pharaonic smiting scene in the Naqada I period and probably in Naqada II too. Since the Narmer Palette image is a brandishing scene, it has no connection to the Tomb 100 tableau and there is a very long period of time development between the two images. We do not have any intervening evidence of how the scene developed from one of domination and brandishing by Narmer to the true smiting action. But the use of a seal on the king’s hand had clearly fallen out of use by the reign of Den, to be replaced by a staff. The action of grasping the prisoner’s hair was a much later development, as the presence of the ruler’s hand and staff was sufficient to control and render helpless the supine figure, while the active stance becomes more pronounced from the First to the Third dynasties and continues into the New Kingdom.

Andelkovic, B. 2011, Political Organisation of Egypt in the Predynastic Period in Teeter, E. (ed.) in  Egypt Before the Pyramids: The Origins of Egyptian Civilisation, Oriental Institute, Chicago, 25-32.

Hendrickx, S. 2011, Iconography of the Predynastic and Early Dynastic Periods, in Teeter, E. Before the Pyramids: The Origins of Egyptian Civilisation, Oriental Institute, Chicago, 75-82.

Articles in this edition: